He is a fashionable interior designer. Signs some of the most interesting decoration projects in Spain. Everything that Lázaro Rosa-Violán touches, it ends up being tendency. His work has been featured in numerous magazines, his restaurants have been among the most talked about in the city and his hotels have the ability to transport guests from the moment they step through the door.

Biography: the men before the myth

With a precocious instinct for art, Lázaro audited classes at the Academy of Fine Arts at the age of eight. Raised between Bilbao, Madrid and Barcelona, he developed an early taste for decoration in the grand houses and places that he lived and visited. Trained as a painter, traveler by conviction and interior designer by instinct, Lázaro finds inspiration everywhere. His style is every stylish; his cultural background allows him to mix, modify and reinterpret past and present trends for each new assignment. Lazaro began to get noticed as an interior designer with the success of his first project in the Balearic island of Ibiza in 1990. In 2002 opened his own studio, and in just twelve years he has achieved impressive growth with an extensive portfolio of clients and media coverage to match.

Lazaro describes himself like a painter, a traveler and a creator of atmospheres. His philosophy has always been based on accessible design. The experience should be greater than the space and for everyone to participate in. Painter by 8 years old, architect by 20, designer inherently, Lazaro opened his studio in Barcelona in 2002.  Here he forged a new style, bridging a background of painting into the new realm of design. His strengths are found in his use of structure, shape and an acute sense of space allowing him to surpass the clients’ wildest expectation. More than spaces, Lazaro creates atmospheres. Lázaro Rosa-Violán says that he is an ‘urban archaeologist’ and ‘style hunter’ merging  an eclectic mix of  the urban city streets with  the serenity of the balearic islands. His designs inspire even the most jaded city slicker to put down the blackberry and relax.

His ability to re-interpret classic design icons, with a culturally aware sense of aesthetics and technical knowledge has resulted in an impressive portfolio filled with a sense of luxury and timelessness.  To date Contemporain has created over 40 distinguished interiors for some of Spain’s most successful restaurants, boutique hotels and retails establishments, from a 100-room hostelries to a micro food shop.

His keen eye to every last detail, allows him to orchestrate a combination which brings together the finest pieces of  furniture, textiles and wall art  resulting in harmonious interiors which instantly stand out thanks to their effortless charm and sophisticated color palette.

In today’s cluttered marketplace, clear and succinct branding is vital. Unique identities are not achieved by vision alone. With this in mind, Contemporain has changed the face of design in Barcelona and has left his signature mark on dining rooms and lobbies throughout Catalunya.

Let’s see some of his best projects.

The designer has created a warm, elegant and cozy environment. Every mobile, every lamp and every detail has been carefully chosen. In the restaurant, everything has a reason for being and living. 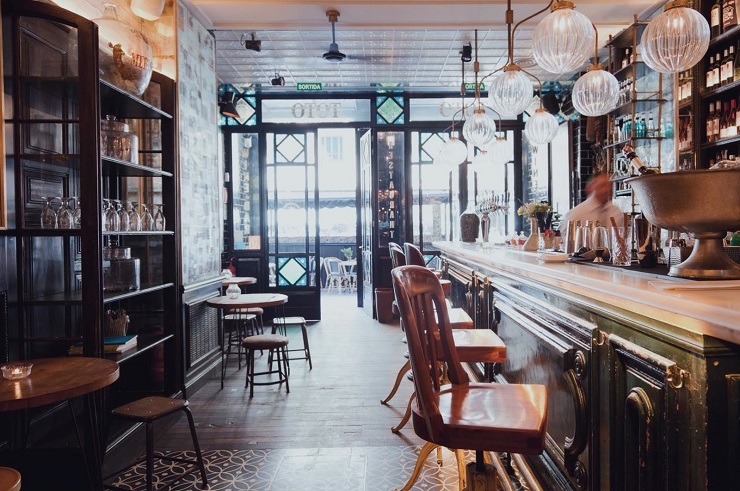 Artte is a bar, bistro, concert hall, and teahouse in Barcelona where Rosa-Violán was faced with creating harmony in a multipurpose space that lacked natural light—the perfect platform for his usual aesthetic of distinctive lamps, mirrors, and glass. “We created different lighting moods depending on the zone and the hour of the day,” he explains. “We always use warm indirect LED lighting to simulate daylight.”

The concept of hotel is based upon the spirit of hospitality found in Catalan inns throughout history. Banys Orientals is conveniently located in Barcelona’s center, in the chic and trendy Born neighborhood.

Only You Hotel Madrid

Only You Hotel & Lounge is designed for people, to make their stay in Madrid a unique experience. The hotel is located in the center of Madrid, on Calle Barquillo, just a few meters from Paseo de Recoletos and the Chueca neighborhood. The carefully designed interiors complement the beauty of the building (a former Palace, dating from 19th century), giving the hotel an eccentric touch with colonial-style color. The charming, intricately detailed rooms and personalized service aspire to make people feel.

ONE of the most important projects of Rosa-Violán is the new store of Pronovias. The new space has more than 300 square meters and two floors. The artist was inspired by the eastern world for this project. Rosa-Violán created an exotic, romantic and feminine space. The interior designer used the florares apricots and opted for the gold to the details of the furniture. The decor has the elegance and romanticism that characterizes the brand.

The Most Iconic Project

The designer is an expert at presenting a theme. At Praktik Bakery and Vinoteca, the effect is almost theatrical—a motif with a motive and a message, repeated subtly throughout. The approach also holds true at Barcelona’s 5-Star Cotton House Hotel, a member of Marriott’s Autograph Collection.

Praktik is a mini-group of smart, mid-range hotels that have three establishments in Barcelona and one in Madrid. The interiors of all four were designed by Lazaro Rosa Violán. The work in this hotel was typified by combining modern and antique elements into sophisticated settings that pay homage to late – and mid – 19th century European styles.

Situated in a converted clinic in the 19th-century Eixample neighborhood, where works of Gaudí and other modernista architects were built on the district’s distinctive chamfered sidewalks, Praktik Bakery’s design was inspired by Northern Europe. The 74 bedrooms, although on the small side, have received an optimum treatment of space. Guests actually enter through the industrial, art – deco – inspired bathrooms, and the sleeping areas have been simply adorned with white cotton textiles, painted brickwork and bright yellow feature walls. As lovely and practical as they are, it’s the bakery-lobby of the hotel that holds the most interest.

His first project a restaurant, was carried out in the Balearic Island of Ibiza in 1990 and in 2003 he established CONTEMPORAIN, his Barcelona based design firm with a flair for international design and impeccable taste is located on a quiet street in the Eixample, steps away from the Arc of Triumph.

His style could be described as neoclassical, but Lazarus said his working method passes by listening to customers and adapt to their style, so that its projects are a great eclectic spaces and trends.

All interior designers and design lovers are attentive to the work of Lázaro Rosa-Violán, and customers are vying to have their talent and style to differentiate their spaces other.

This is the workplace of Lazaro Rosa Violan in Barcelona. His company Contemporain Studio employs a team of eight industrial, interior, and graphic designers. It seems like every single corner of this workplace was saturated with attention to detail and the overall feeling is more like a home than an office.

(His inspiration)“My travels. Wherever I am in the world I am completely enthralled by the visuals around me, always finding ways to incorporate the details or feelings of that moment into my work.”

“The interior designer is an actor. He must dress up and change roles, understand new identities and integrate them with his own.”

“Brand I touch, brand that grows”

“I am a painter, traveler, and creator of atmospheres.”

Lázaro’s interiors are beautifully layered, with a mix of styles blending together perfectly. The palettes he chooses are typically sophisticated and restrained, usually with one bold accent color. Lázaro’s work is rooted in masculinity, but he balances it with a touch of glamour nearly every time. In a word, his work is sublime.”
For us, he is a visionary designer. And it was very hard to choose only one favorite project.

Rosa-Violán has transformed the iconic 19th-century building while conserving key original elements such as the marble staircase, delicate parquet and boiserie embellished ceilings.

Interiors are inspired by the building’s original purpose, with the “softness, comfort and delicacy of cotton” influencing throughout.

The spectacular spiral staircase, which was built in 1957, is not supported by the floor, but is suspended from the metal frame on the upper floor.

The Hotel Cotton House is located at Gran Via De Les Corts Catalanes in the heart of Barcelona. For us, this is one of the most beautiful and interesting project.